The OAHS Library and Digital Resources

An additional benefit of membership is access to the Society's library, which is housed in the Sackler Library, Oxford. The earlier volumes betray the interest of the Society's founders in ecclesiastical architecture, and many of the books added then are now extremely hard to find. From later periods the library retains a good selection of books and ephemera concerning local history, including many titles reviewed in Oxoniensia.

This page brings together as many of the Society's publications, other than Oxoniensia, as are available online at the moment. These are mostly from Google Books, though we have in some cases reprocessed them, dividing them into smaller units and performing OCR. We have aimed to list all the publications we know of, whether or not we have texts. Offers of scanned versions of texts not currently in our archive will be very welcome. 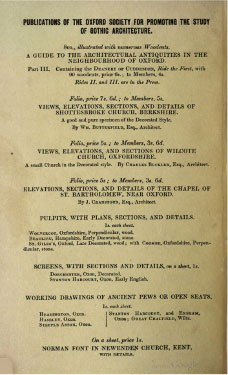 From its foundation in 1839 until 1847 the Society issued annually a volume containing its rules, a list of members, and various catalogues of its collections. It also issued several times a year volumes of proceedings consisting of minutes of meetings as well as the texts of papers that had been read in cases where the meeting had voted that the paper should be printed, which seems to have happened more often than not.

Proceedings of the Oxfordshire Archaeological Society

This started life in 1856 as the Transactions of the Archaeological Society of North Oxfordshire.